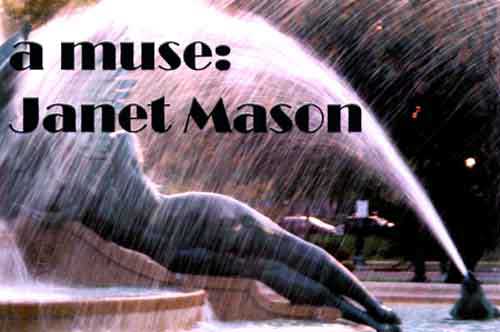 a world of muses linked through time and space

You can reach Janet Mason at janetmason3@msn.com

Poetry of Eros A presentation of the work of Greek American poet Lili Bita and accomplished percussionist Barbara (Boom Boom) McPherson. To view this show, you must click on each slide--listed on the left hand side. Ordering information for Barbara's "Primordial Pulse" CD appears on slide number 10.

Janet Mason's poetry and fiction on the web:

Swell: Art, 1977 Check out the most recently published excerpt of Janet Mason's novel in progress, Hitching To Nirvana, entitled Art, 1977

Exquisite Corpse: Issue 5 A Journal of Letters and Life poems: Sapphics for a lost longing; Sapphics for the night sky; The three wives and I; Calamity Jane: (the frontier revisited); and Holmesburg Junction.

Exquisite Corpse: Issue 11 A Journal of Letters and Life A chapter (an early draft) from Janet Mason's novel in progress, Hitching To Nirvana, published as a short story entitled "The Dolorous City." Cybergergrrl.com Reviews -- Lee Anne Phillips reviews Janet Mason's collection of poetry When I Was Straight. Telling Moments: Autobiographical Lesbian Short Stories-- This anthology, edited by Lynda Hall, includes a chapter from Janet Mason's Tea Leaves: a memoir of mother's and daughters. EOAGH: A Journal of the Arts -- a woman alone and other poems by Janet Mason

Janet Mason's reviews and interviews on the web:

A Section of Friends-- innovative websites to check out!!!

Click here to visit Joanne Brown's fabulous design site -- be sure to check out her latest work and the link to the Northern Liberty Recreation Center (in Philadelphia) -- featuring a flash intro with audio and photographs of the kids at the center.

click here to read Rosemary's most recent poem on amusejanetmason.com

Kathy Anderson's new website Playwright, fiction writer, and poet, Kathy Anderson has just introduced her new website--with news of her recent plays and awards. Be sure to check it out!

Wailing With the Wolves: the Words of Judith K. Witherow This site features writing and art by and about Judith K. Witherow, a Native American Indian lesbian poet, essayist, storyteller, photographer and activist.

Click here to read Judith's essay My mother, your mother.

Damian McNicholl's blog. Damian McNicholl is the readings/appearances of A Son Called Gabriel . He writes in this section of his blog about meeting Janet Mason.

Gloria D. Rohlfs is a results-getting life coach and Jin Shin Jyutsu practitioner. Check out her By Region Page. Click here to read her essay "My Mother's Death."