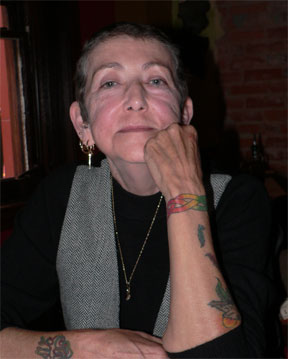 anthologies, magazines, women's textbooks and Lesbian/feminist publications. Judith is on the Board of Directors of Sinister Wisdom. Her book of poetryAll Things Wild was reviewed in Lambda Book Report. Judith won the first annual Audre Lorde Memorial Prose Contest for Non-fiction. She was the first female umpire in her county. Her website is http://www.jkwitherow.com/

MY MOTHER, YOUR MOTHER

It was a perfect lie-a-bed morning. The kind where a million things need doing, but you've already formed excuses why that won't happen.

The next thing you know the outside world enters the house through the phone wires. Someone is nonstop calling your name, and she's every bit as determined to wake you as you are to feign sleeping.

There wasn't a doubt that my partner would keep this sing-song going until I answered the phone or my eardrums ruptured.

Why is it that you HAVE to come to the phone when it's one of your parents? I'm an adult! What could someone in their seventies do to me that couldn't have been done at a younger age? Well, nag, and that can be serious torture.

Reaching for the phone gave me enough time to compose myself into the type of person fit to chat with a frail woman. "Hi, Mom, what's wrong? Oh, I know you hate to bother me, and you're certainly not one to bother unless it's realllly important."

That's another thing. Why do parents always say, I hate to bother, burden, or disturb you BUT . . . If they don't want to do any of these former annoyances they could call another family member.

"The parakeet is sick," she tells me in hushed tones. "How awful," I respond. I think to myself this woman has wrecked my morning with words that carry the weight of a death in the family. Not just the death of a relative hardly known, but one you'd buy flowers for, borrow dress clothes and grieve over. This was pathetic. 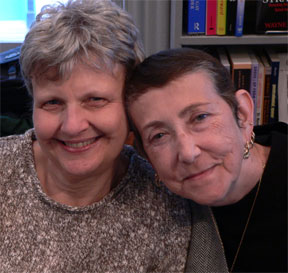 'm calm. "What does she act like," I ask? "She's not moving much, and she won't eat." "Ma, it could be anything ailing her. Isn't she really old?" Of course she can't remember the age, but this opens that Pandora's Box of every pet ever owned, sold, lost, had neutered, etc.

This is something I hate more than skin caught in my zipper. It's that trap you fall into of family tales and traits too often repeated.

Here's an example to prove my point. Every Thursday night, for years, Sue has picked up prescriptions and groceries for my parents. On shopping day I'm supposed to call and get their list. It makes me want to whimper just thinking about it, but I call because they're MY parents and it's MY job.

The call always goes the same way. Don't think you can interrupt or change the way it's done. The Spirits would have shown me the way if this were possible. I know I'm guilty of some fun time sinning, but no one deserves years of this mind mauler. "Mom, do you know what you and Dad will need this week?" "Oh honey, I was just thinking about it. We don't need coffee or tea and I'm pretty sure there is enough milk. I don't think I'll get ketchup, mustard or mayonnaise until next week."

"Mom, what is it you DO need? What about bread?" "No, we bought that last week. We also have plenty of canned goods. There are green beans, peas, tomatoes, sauerkraut, corn and sardines." I want to reply, "Sardines aren't a vegetable, you shelf hopping non-shopper," but I don't. Any remark will only start us back at the beginning of her non-list. Pleeeease, Mother, I silently whimper. The idea of a shopping list is to ask for items you do need. What you already have we don't need to buy. WE ALREADY KNOW THAT! Of course, I'm mentally saying this to the one person who can relate. To her I softly say, "Do you want me to call you back?" "No, let's finish now. I don't need onions, and I still have a few potatoes left."

I know. I'm a living saint, and this also gives you an accurate description of my mother. Meanwhile, the parakeet is sick, and nothing will do but Sue and I get dressed and go over to examine it. On arrival, I see the bird is in an open shoebox on the table. I think, fine, case closed, problem solved, we're all but out of here. No such, as usual, feather plucking luck. Polly was alive, but just barely. The major clue toward my diagnosis was that if something has wings and is supposed to fly, but doesn't, chances are it's not going to. Since I'm already there I decide to pick the bird up and look at her. I do a pretty good imitation of my own doctor and make clucking noises that sound like I know what I'm doing. There's nothing in my background to make anyone believe that I have vet skills. That didn't stop Mom from having faith in my healing abilities.

When I examined the bird it barely moved. That was another telling sign. Polly had always treated me like a walking cuttle bone. I hoped the little parasite, I mean parakeet, wouldn't bite me. She did try to peck me but couldn't quite bring blood.

There was no way to break the news gently so I just spoke what I believed.

"Mom," I said, 'Polly isn't long for this world. She's very ill." She replied, "You don't mean that. I think what she needs is her toenails cut. Look at them. Don't they seem too long to you? I don't remember them ever being cut." Sue looked at me. I looked at Sue. I was just about to say, "Don't even think I'm going to do something as dumb as cutting a dying bird's toenails," when Sue gave me a pleading look.

"Why don't you try it, Judith?" She and Mom are a lot alike. They both get me to do things against my better judgment. Mom got the big silver clippers and the pedicure was started. About half way through the toenails on the second foot, I noticed the bird wasn't trying to bite me anymore. In fact she wasn't moving at all. WHHHY MEEEEE?

Motioning Sue to come closer, I whispered, "I think the bird is dead. She's not moving." She looked stunned. This was apparently news she hadn't considered. Was I the only lucid person in the entire room? Hello!

Sue then said something I can still hear bouncing around in my head. "Almeda, I think Judith just killed Polly." Correct me if I'm wrong, but wasn't I the one who wanted to stay in bed today? Didn't I try my best to stay away from this whole mess?

"Try mouth to mouth resuscitation," Mom pleaded. "No way," I said. "That's it for me. You two blow in its little beak until its eyes bulge. I'm finished, done, through, and on my way out the door."

Naturally, they tried, but I am proud to say these lips touched no beak. That little seed sucker would depart this world without a final insult to me.

My offer to bury Polly was declined. Mom thought perhaps I MAY have held her a bit too tight during the pedicure, and with time her lungs would expand and she would revive. Right, and I French kiss parakeets.

Years later we were having Thanksgiving dinner at our house. Everyone was recalling past family events. When it came time for Mom to speak, she gently said, "Sue, remember the day Judith killed little Polly."

Often Sue has razzed me about the "Avian Incident", but getting dissed by your own mother is a serious put down. I honestly believe she waited until I had a mouthful of coffee.

I'll swear on whatever is sacred in your life that bird croaked on its own. If I'm guilt; I'll phone for your shopping list.

Click here to learn how to submit to amusejanetmason.com