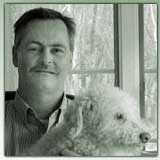 I met the readings/appearances Damian McNicholl at a bar last fall where we were both giving a reading. Even as literary readings in bars go, this one was not a good one-in addition to the thick smoke and clinking glasses, there was the thump thump thump of a sound system that someone could not turn off, as I recall, and the chatter was not kept to a minimum. Still, as poets and writers of fiction, we trooped on.

Before the ill-fated reading, Damian and I had a nice chat and exchanged books as readings/appearancess often do. What I realized later was that Damian had not really given me a book, he had, instead, handed me a world-a world that, once I opened it, gripped me page by page and would not release me until drying my eyes I came to the end of the last page.

A son called Gabriel (published by the New York based CDS books) is Damian McNicholl's first novel and it is a gripping story of a boy who grows up to be gay and intellectual in working class Ireland. The writing is stellar. The story is ancient and universal-one of belonging and not belonging, of forever being an outsider in your own world and of the need to find the home that exists only inside yourself.

This Book Sense Pick of the Year opens in 1964 when the young Gabriel is six and refusing to go to school because the class bully-a lad named Henry Lynch -will not leave him alone. "He hated me because I wasn't interested in playing football with him and the other boys. Where was the fun in chasing a ball around a mucky field? I wondered. I preferred playing stuck-in- the-muck with the senior girls. Even though they were eight, nine, and ten, I was every bit as fast as them. And stuck-in-the-muck wasn't just a girls' game like Henry kept saying. You had to be every bit as fast and skillful as footballers in order to avoid the person playing the jailer, otherwise she tagged and sent a body into the jail corner."

By the end of the book Gabriel is in his final year at Saint Malachy's, an Irish Catholic school that is a cut above the rest that Gabriel tested into and struggles through, and is applying to universities in England-where he is destined and determined to find his freedom by crossing the water to escape the confines of faith and family.

The book is peopled with siblings and cousins, his mother with whom he has a wrenching relationship, a distant father, a grandmother, a deceased grandfather whose influence on the family and an elusive and mysterious uncle who is also, perhaps not unpredictably (since every good Irish family must have one), a priest.

In Ireland, religion is something more than what the narrator accuses his mother of "ramming down his throat"-it is, literally, war. In between the span between being a boy and a young man, McNicholl explores the fierce animosity between the Catholics and the Protestants known as the "Prods"-and the accompanying class differences.

Gabriel, as a boy, is acutely sensitive and also deeply religious. His budding sexuality is all at once a source of shame as well as pleasure, agony as well as ecstasy. In his pre-teen through his teen years, Gabriel shares his secret sexual life and often a bed with his slightly older friend Connor. When the older boy who has also become sexual with girls becomes concerned that he may have turned Gabriel into a quote "homo," he decides to call it quits.

Getting up from the bed that they have shared for the last time, Gabriel longs for an encounter with God-and in the writing, in the portrayal of his struggle, his words become incantation, religion.

"I switched on the light, looked at my face in the mirror, and despised the image gawking back at me in the stark brightness. Falling on my knees before the toilet bowl, I knelt and tore at my hair as I prayed and beseeched God to come and help me. I prayed and beseeched for ten minutes, making up the prayers and pleas as I went along. And He came, just like He'd come to me so long ago. He was my maker, my one true friend. He came, and His soothingly masculine voice spoke inside my head. He stopped the whirling thoughts. He told me that I was good, that I was not to be so hard on myself, that I was His child. I was His child, and if I was careful and changed my ways I would not end up a homosexual."

Having met the readings/appearances and been taken in by his gentle manner and Irish brogue, I am tempted to want to know how much of his novel is autobiographical-especially since the story is so emotionally convincing. Recent popular distraction aside, however, I know that it doesn't really matter. The important thing about A Son Called Gabriel is that it is a story worth telling--and also a story worth picking up a reading until the final page has been turned to its new beginning.