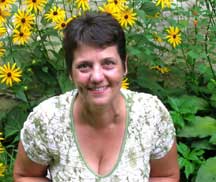 Bio Sally Bellerose --In the past much of my writing involved themes of sexuality, illness, and class. I've been writing about my elderly parents lately and I find that the themes haven't changed much. The older I get the more interested I become in humor and absurdity. I have received various grants and fellowships including an NEA, The Barbara Deming Fiction Prize, and The Rick DeMartinis Award. My recently published work can be read in Rock and Sling, The Binnacle, The Journal of Humanistic Anthropology, The Boston Literary Magazine, Passager, Cutthroat, and Saint Ann's Review.

I have just finished an extensive revision of my novel, The Girls Club and am hoping this is the draft that will inspire a fine press to publish the book. The Girls Club, won first place in Writers at Work, has been excerpted in The Sun, The Best of Writers at Work, and The Quarterly Review, was a finalist for the James Jones Fellowship, the Thomas Wolfe Fiction Prize, and the Bellwether Endowment. And most recently won the Rick DeMartinis Award for fiction. Chapter One, complete with sex, illness, class, and humor, can be read on the Web at http://SallyBellerose.com

What if Your Spouse?

I'm ironing my Dad's Dickie work pants on an ironing board older than I am. The pants I'm pressing are a 'hang around the house' pair, creases white with age. Mom has taken in the seat so the back seam is four inches wide. I steam the seam flat.

"What if Your Spouse," Passager, edited by Mary Azrael and Kendra Kopelke, University of Baltimore, Issue #43, winter 2007.

SURVIVING MY MOTHER'S DEATH....READ THE EPILOGUE OF TEA LEAVES BY JANET MASON...CLICK HERE...