Note: Anita Cornwell has had dementia for several years and her conditioning is deteriorating quickly. She is a resident at Stapeley Nursing Home in the Northwest section of Philadelphia. To find out more information on Anita, e-mail her good friend Sharon at Sharon.Hurley@uphs.upenn.edu .

This commentary was first aired on This Way Out, a worldwide lesbian and gay radio syndicate based in Los Angeles. click here to read Anita's work on amusejanetmason.com

I first met Anita Cornwell in the early eighties at a reading that she and Becky Birtha were giving at a now defunct lesbian and gay community center located on Camac Street, one of the back alleys of center city Philadelphia. Anita was reading from her book, Black Lesbian in White America, published in 1983, the same year that I came out as a lesbian. 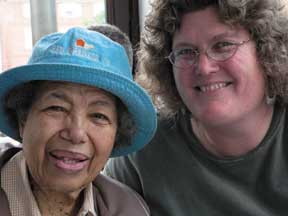 small and cramped and filled with lesbians. There was no place in the world I would have preferred to be. Many of the women in the room, Anita and Becky included, would come to be important members of my community, intimate friends, and fellow travelers in the life that still lay ahead of me. At the time their faces were still new to me, and these women I had yet to meet, like my list of books I had yet to read, were an endless source of fascination for me.

Looking back on this reading, by these two women who were to become influential friends and alter my course as a lesbian writer, I'd like to say that my world split open, that I was shaken to the core, my perspective inalterably changed. But this reading was almost twenty years ago, and as memory goes, there are many things that have slipped away from me. I do know that this reading was an important part of my ongoing consciousness raising, which in those days seemed to be a daily, if not hourly, event.

Since I can't recall who I was with, I assume I went alone. But I didn't feel alone in the intimacy of that small room which resounded with the leveling honesty of both Anita and Becky's work. When the readings/appearances had finished reading I went up to the front of the room and sat down with them. I remember that we talked for a while--and that what we talked about, perhaps, was substantial since less than a year later I ended up in the same writing group with them. But all I recall of our conversation is that I wore purple dayglo socks and the aspect of my personality that was reflected in this was not lost on Anita.

Perhaps it was those purple socks that set the stage for a friendship.

I read both of their books and wrote a review of Black Lesbian in White America for Tell-A-Woman, the newsletter of the Women's Switchboard, a collective of which I had been a member, and also published a review in off our backs, the lesbian feminist newspaper out of Washington D.C.

Anita's book was fire under my heels. Shortly after reading and reviewing it, I attended a women's liberation conference at Temple University. No doubt many powerful things were said at this conference. But what I remember most was that one of the women on the panel, a white, heterosexual, upper middle class woman who had made a name for herself in the feminist movement, answered a question from the audience by saying something to the extent that the women's movement wanted to include Black women but that "those women didn't want to join us." The audience was a very mixed group, Black and white women and other races, representing members of the local community as well as students and the academics who worked at the university. Hisses and objections to this obviously racist remark rifled through the audience, my own voice among the chorus.

After the speakers were done the room was still buzzing with lively dialogue and debate. I entered into a conversation with a 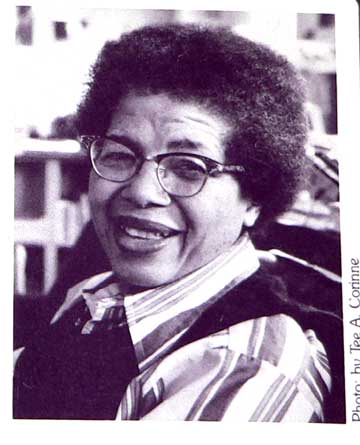 conservatively dressed Black woman, a few decades older than me, who had previously been talking to one of the few men in the room. Her mild amusement--perhaps at my youth, or my idealism, or my red high top sneakers-- turned to nervousness as I mentioned the L-word in the title of Anita's book. Then I paraphrased Anita's statement "You seem to be saying that I have to be led either by white womyn or Black men. Why can't I lead myself?"

"That's right!" the woman exclaimed, her vehemence and enthusiasm undampened by the fact that her male companion was still standing by her side.

Her consciousness changed on a dime.

And that is the power of the written word.

Anita came of age as a lesbian in the 1950s, and in her early writings--published in The Ladder and The Negro Digest--she was among the first, if not the first, to identify as a Black Lesbian in print. Born in the Deep South, "when integration was a term seen only in the dictionary." Anita writes of herself as a young woman hanging out in the Village where "She was looking for some of them, but they were home in the closet growing shoe trees." She writes of her involvement in the women's movement when she was often one of the oldest women in the room as well as being one of the few Black women: "We of the fifties (and the forties and on back to when) not only had to operate from the closet but, worse yet, most of us seemed to exist in a vacuum." Anita's writing reminds us of the things that were and are specific to her generation, and at the same time she writes of truisms that we would do well to heed today. "Just as there is no such thing as a little bit of pregnancy, ditto with oppression," she writes. And she reminds us that "with all the freedom of expression allowed today, Hollywood's exploitation of womyn is more violent and vicious than even the most pessimistic Feminist would have believed possible just fifteen years ago." And she stares truth in the face baldly by questioning the obvious, "Out of over 50 million womyn in this country, why are so many so content to be little more than charwomyn for men?"

Anita Cornwell writes in a voice that is incisive--as Becky Birtha writes in the foreword of the book, Anita puts forth "...an acute political analysis of both racial and sexual oppressions...both radical and feminist...written long before those words were in common use together." She writes of her collective struggles--joining her voice in a long interview in the mid-section of the book with that of Audre Lorde's--and she writes of her individual struggles as a lesbian writer: "After staring at hundreds of blank pages....I learned to face myself. I learned that I not only existed but that I had every right to my own existence!"

As strong as this voice is, it is my concern that it continues to be heard.

Books go out of print, and politics--though they are still as necessary as ever-- go out of fashion. History becomes yet another memory that slides away.

I would like this not to happen with Anita.

Anita writes in a voice that is above all else, unapologetically her own, a voice that is capable of reminding generations to come that they have every right to their own existence. And that voice is absolutely necessary.

When I think of Anita it is always her voice that comes to mind.

Along with her writing voice, is her speaking voice coming to me across the telephone wires. Our time together in the writing group was short lived since Anita's schedule--writing nights and sleeping days--has made it increasingly difficult for her to participate in an ongoing group. Every few months--sometimes longer--there are gatherings where we get together. At least on one occasion we offended the hostess of a party--a mutual friend of ours--by sitting in the corner all night and talking about writing. More often there is Anita's voice on the phone, an encouraging message left on my machine, or a late afternoon conversation that always alters my perspective--reminding me among other things of the virtues of patience, necessary for hanging in there over the long haul-- and leaves me carrying the warmth of Anita's voice with me for the rest of the day.

Over the course of nearly twenty years there are many things that a friendship can contain. One of these things for me is the memory of my mother who loved Anita's work. (Like Anita I was raised by a feminist mother who very much taught me to be my own person.) Another thing is the memory of a movement, the lesbian feminist milieu that I came out in which still shapes my relationship to myself and to the world. Then there is mutual respect, as Anita has always taken an interest in me and my work.

But the most important thing about my friendship with Anita is the affection that one woman can feel for another, deeply connected through the years.