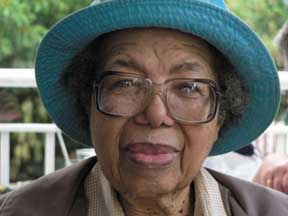 Anita Cornwell was in her forties by the time second wave feminism arrived in the mid-1960s. She soon became one of the few black lesbians in the United States who were living out, speaking out, and writing out. Her pioneering book Black Lesbian in White America published in 1983 by Naiad Press. Part 2 of 4 -- click here to read Part 1 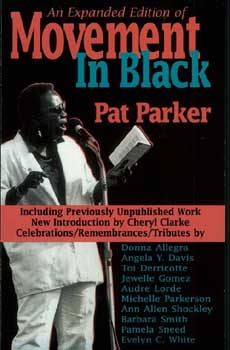 As I said, I had planned to stay in Houston a year and write a novel. But I stayed ten days! That was all I could take. I realized that in my parents' house I would still be the child. And by that time I was a woman, and I was used to doing my own thing and controlling my own life.

But while I was there, this friend--this girl I had had the kissing game with--took me out to some of the Gay bars. She had come out; she had been out a long time. MY parents were very freaked and worried because I was going out with her. They told me to be very careful of those Lesbians because they cut people and shoot people, and don't let her take my money. That whole number, right?

I walked into this bar, and it was really weird, really weird! The people were into role-playing, and that startled me. But at the same time, there was something very appealing there. I felt that this was where I should be. It was sorta like, This feels close!

Then I left and went back to California. Out there was this woman -- a friend of mine -- and we used to spend a lot ot time playing tennis, riding horses, and climbing mountains and all that stuff. And like what we were doing was turning off the very heavy sexual thing that was building between us. Then we got into this affair which freaked us both out! She immediately went of to her shrink and, ha! ha! I tried to figure what was wrong. But after we calmed down, we realized that maybe that was what we should do but not with each other. So she suggested that we go to one of the women's bars, but I didn't know where any were.

But I did know a woman who was supposed to be Gay, so I called her up, and she gave me the name of three bars. We finally setled on a bar that was in a part of the city that was new. I walked in, and it felt so good. It was like coming home. I felt, "Whew! This is the place to be. This is what you're going to have to do!"

It was weird because I didn't know anything about relating to a woman. I was scared to death about the whole prospect of it. But it was like this poem written by Harriet Vance talking about two women making love for the first time, and neither or them knowing what's happening. And the last line says, "And so they came together and did what comes naturally." And that's just about the way it works, you know.

I finally met a woman in that bar and lived with her close to a year. Oh, I suppose I met here after I'd been going to the bar about three months, or something like that. I had met other women, you know, but there wasn't like a whole lot of heavy interest. It was so weird though because I didn't know what to do, or how to act. I had gotten this whole thing about role-playing from my friend in Texas, and I knew for sure I wasn't going to be a femme!

Yes indeed, I knew that after six years of marriage I was not going to be a femme! So I went out a bought this cowboy hat a pair of boots. Cowboy boots, right? And a vest! And I went walking around in this cowboy outfit, and ha, ha, ha! That's right, I didn't know beans! I didn't know jack shit! But I figured that was what I was supposed to be doing, and from all the books you read, that is the impression they give you, you know?

Then I learned that, no, that's not what's happening. I found it easier not dealing with role-playing. But I did try it, although my heart wasn't in it, you know?

No, I'm not completely surrounded by white women because I am in this group of Third World Women. And because of it, I do have a lot of women of color around me. Most of the women in our group are not into roles, because they are Feminists. But there are still a lot of women in the bars who are still into role-playing, and I had very little contact with them.

It's true, very few Black women are in the Movement. They stay away from it in droves. I can understand some of it. The Movement has basically been middle class, and I can understand the reluctance of Black women to deal with it. But the only way I see it changing is for those Sisters to come out there and change the situation. You know, it's really interesting, I heard one woman say that the only Black Feminists she knew were all Lesbians! I'd never thought about that, but since then I've been tyring to think of any Black Feminists who aren't Lesbians.

Anyway, after my first relationship with a woman, I knew where I was going. And since that time I have had many other relationships. You know, it's weird one of the things that I notice happening behind poetry readings. Like when I was married and the guys would be reading poetry and there would be all these women who were like groupies around them. And that started happening to me. It freaked the hell outta me! You know most of the women who come to hear me are Feminists, so I would never have thought of them doing something like that.

But these women started approaching me, and I could never be sure if there were approaching me because they were really interested in me or because they were interested in Pat Parker, "The Poet," you know? There's this whole aura that travels around about ART. And it's weird, like I've heard of myself being in places that I didn't know anything about.

One night in a bar I met a woman who was sitting there telling me about this party she went to with me! Now I don't know this woman from Adam! I've never seen her before in my life, right? And obviously she's never seen me before or she would have known that she was talking to me. And what was so funny is that right there in the bar was this big silk picture of me on the wall advertising my book. But apparently she'd never looked up and seen it. So when she asked, 'Do you know Pat Parker,' I said, 'Yes, I know her.'

That sort of thing made me very paranoid about any relationships that I entered into because I sure didn't want to get involved with somebody and then find out that's what the motivation behind it was. That's nothing to build a relationship on.

How did I meet Ann? Well, that's an interesting story. When I first met Ann, she was going with a woman who is a friend of mine who lived in a house with a woman...No, this isn't a poem. See, it was a collective, and this woman that Ann was going with lived in the collective, and a woman that I was seeing also lived in the collective. So I was over there one day visiting this woman, and Paula came in with Ann and introduced us. Then for a long time, I never saw Ann unless she was with Paula, so I never thought about having a relationship or anything like that with her. Finally, they broke up, after I'd broken up with the woman that I had been seeing.

Then one night I did a reading, and I was really hper. I couldn't come down off the reading! I went out to this bar in San Francisco called Scott's, and there were a lot of friends of mine from the Third World group that I'm in. Then I wanted to go to another bar, but they didn't. I knew I'd been drinking and shouldn't be driving, so Ann volunteered to drive me. And then, I don't know, we finally just got into each other. And from that point we went off and built into where we are now.

Coming next month: Part 3 of Anita Cornwell's interview with Pat Parker: "Anne was a bass player when I met her"