Click here to read Toni's poems and to hear audio clips of Toni Brown reading her own poetry.

(note: this essay was published in Sinister Wisdom 76: the Open Issue--Summer 09)

A true friend is hard to lose. The loss is palpable -- like some previously unknown core at the center of you is suddenly ripped out, howling and empty. This is how I felt when my good friend, Toni Brown, died on April 17th, 2008. She was 55 years old.

As her Philadelphia memorial service -- standing room only at The Painted Bride Art Center -- confirmed, Toni was many things to many people. She was a writer -- of poetry and fiction, well known in the lesbian, the African American, and the larger literary communities; she was a writing teacher to college students; and she was a teacher and a mentor to the "at-risk" teenage girls that she worked with for the last ten years in her position as director of education, training and outreach for Girls Inc.

Toni and I were close friends for nearly 20 years -- we met several years before she moved to Philadelphia. At the time, she lived in Amherst Massachusetts and was a member of a Northampton lesbian writers group. We met through a mutual friend, who was in the Philadelphia feminist writers' group with me, at the Outwrite Conference, an LGBT writing conference held, at that time, in Boston.

A year or so later, my Philadelphia writing group went to Northampton to give a reading. I stayed at Toni's house in Amherst and took her large gentle German Shepherd, named Zen, for a walk. Zen led me into the garden at the Emily Dickinson house -- where I made a reservation for the two writing groups, now one large group, at least for the duration of our stay.

I remember all of us sitting in the large, Victorian sitting room. The drapes were drawn and there was a hush surrounding the words of the tour guide who carefully left out any mention of Emily's lesbian passions. We didn't contradict her, but the room was bursting with our silence. Now, reflecting back on that afternoon, I see that there was something prophetic about it. We were surrounded by the ghostly presence of Emily Dickinson even as we laughed and posed for pictures. At the time that the pictures were taken, in the Dickinson garden, some 20 years ago, Toni had a short Afro. A year later when she moved to Philadelphia, she began locking her hair-always, it seemed, twisting the tiny nubs, until they grew down below her shoulders.

After Toni moved to Philadelphia -- to be with the love of her life -- the two of us became closer. We took Zen for long walks in the Wissahickon. "Zen, the dog," as we called her, would chase sticks and squirrels, the occasional deer, as Toni and I walked and talked about our writing, our lives, our loves -- walking and talking, talking about everything.

Our writing group was a kind of tribe -- bringing us together in the trust that we shared through our work and in the knowing of each other through the years. Toni and I did readings together -- sometimes with the writing group and often just the two of us giving readings together or with others. Toni also performed with my partner, Barbara McPherson, a percussionist. Every now and then, Toni and I would decide to spend time together -- one on one -- setting aside time to critique each other's work. During this time, I read a number of Toni's lesbian vampire stories -- some of which would later be published in such places as Night Bites: Vampire Stories by Women and Night Shade: Gothic Tales by Women and Out for Blood: Tales of Mystery and Suspense by Women.

Toni went on to focus almost exclusively on poetry and eventually the vampire stories faded. Toni, however, was always at least as complex as the vampire stories she had written -- and, true to her Scorpio nature, she was always a mystery. When I think of Toni, I think of complexity and identity but most of all I think of love. Toni had come of age as a lesbian feminist in the Northampton lesbian community in the 1970s -- lesbian feminism was new and there were some hard rules to live by. There were many aspects of this culture that were not easy for Toni. The times were different, fierce and separatist. Toni was raising her son who she had given birth to during her young, college years.

The irony that many of the women who then were identifying as separatists were later -- after her son had grown up -- partnering with younger women and giving birth to boys (artificial insemination is more likely to result in the birth of boys) was not lost on her. Still, these were the times and the community in which Toni had shaped her lesbian identity.

Toni came to Philadelphia to connect with her other identities. She was a Cave Canem poetry fellow in the years 1998, 1999, and 2,000. Cave Canem was begun in 1996 as a weeklong summer workshop/ retreat designed as a "safe haven" for black poets. Toni and I read together when she returned from one of these retreats -- and in her poetic voice I heard a new level of sophistication, a continuing evolvement of her work that had the feeling of a gust of air under her wings. Consider her poem Dreadlocks (published in "Gathering Ground: A Reader Celebrating Cave Canem's First Decade," University of Michigan Press, 2006).

Toni's work was published in Sinister Wisdom, Prairie Schooner and the American Poetry Review, among other places. Her words are the quiet hush around the storm; a keen and often painful observation of detail, insight into injustice in its many forms, and at the same time a testament to love, to all that is good in the world. Her work is transcendent, just as Toni was in her life.

Toni was in the prime of her life and a lover of life. She was healthy -- until the end. She was hospitalized in February with a flu and severe respiratory problems. My partner and I saw her after she had gotten out -- and then she was hospitalized a second time (still having difficulty breathing) when she was diagnosed with a pulmonary embolism and was treated with surgery and blood thinners. Several weeks later she sounded so much better, I was convinced she was on the mend. But then -- a week later, she was hospitalized again, and died in the Intensive Care Unit when hospital staff tried to insert a breathing tube. There are conflicting reports about her diagnosis.

Some things make no sense. Still, I cannot stop my mind from trying to search for answers -- or for meaning. One thing that I am certain of is that I was fortunate to have Toni Brown for my friend. Several summers ago, we spent time together in Provincetown, Massachusetts, a favorite place for both of us, and especially for Toni who grew up in Boston. One night we found a karaoke drag bar -- the audience filled with primarily straight couples, for some reason, and the two of us got up to sing, California Dreaming, as we stood back to back, our shoulders touching as we turned our heads to look at each other as we sang. Later that year in the fall, we gave our last reading together, with women from Toni's old writing group, at an art gallery in Northampton, Mass. 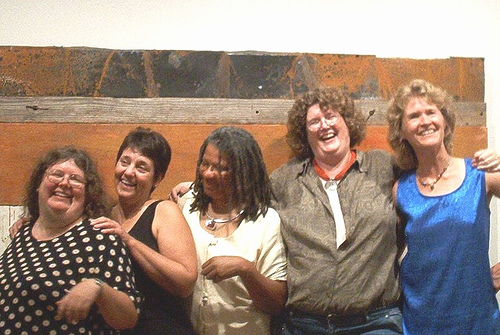 When I reflect back on my friendship and literary association with Toni -- encompassing the past two decades -- I see that she had achieved all that she set out to do when she came to Philadelphia. Toni had left a well-paying secure job in Amherst to come to Philadelphia -- to be with the love of her life and to live in a city where she could connect with a large and vibrant African American community. She wanted to pursue her writing in a more public and dedicated manner. Now and then, over the years, Toni had also mentioned that she wanted to buy a house.

Just last summer, Toni bought the same house that she had rented for several years. The house is a beautiful, large, old home in the Germantown section of Philadelphia with dark polished wood, high ceilings and a stained glass panel above the outside front door. Toni loved living there -- she loved living alone as she did with her newly adopted dog, Max, her office full of books, and her stone fireplace with a Godzilla doll sitting next to it.

Toni had achieved everything that she set out to do, but I do not accept the fact that she was ready to go or that this was her time. The outpouring of grief that came from so many communities -- so many different groups of people coming together -- was an acknowledgement that her life was unfinished.

Still, even in her death, Toni did what she always did best. She brought together everyone who had loved her. This was in keeping with her philosophy of writing that was re-printed on her memorial booklet: "I shape words on the page, send them to be published or read them aloud. There is something about the words going out, bouncing back, the possibility of the shared experience. The hope that somewhere, someone will nod and say, "yeah," and a piece of their puzzle with fall into place."

The week after Toni's memorial service -- an extremely moving event held at the Painted Bride Art Center -- my partner and I spent almost every evening with friends who had also known her. We were a "we" -- friends of Toni. The members of the Philadelphia writers group had gone our separate ways -- falling out of touch because of our busy schedules. But suddenly we are back in each other's lives. With Toni's death, we realized how much we loved each other. We realized that there is still a connection between us and that we need each other.

We tell the old stories and look at the old photos -- of our trip to Northampton 20 years ago when we stood in Emily Dickinson's garden, so happy with ourselves and with each other. Now when we look at the photos and see our younger selves with a younger Toni with her short Afro, we are looking at someone who is now absent. She is the part of our laughter that is gone.

Click here to read Toni's poems and to hear audio clips of Toni Brown reading her own poetry.