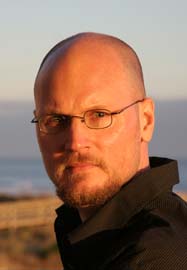 amusejanetmason.com Note: This commentary was aired on the International Gay and Lesbian radio syndicate, This Way Out.

There's a line in Augusten Burroughs newest book, Possible Side Effects (from St. Martins Press) that says, "She was incredibly funny, but in a way that made you say, 'That's horrible,' before you laughed."

The fact is that Augusten himself invokes this same sentiment all throughout his writing, whether he is writing about his childhood: "I loathed the Wild West. I'd sooner watch the snow static on a television set than a John Wayne Western."

This is also evident in his piece about his collection of college T-shirts, in which Augusten (who tells us that his formal education ended with elementary school)- writes:

"People occasionally stop me a greet me with great enthusiasm, and I will get a terrible feeling that I slept with them in a drunken blackout and have forgotten them entirely. But then they point to my shirt, "What year? I was 'eighty-six….My favorite is my Harvard T-shirt because I am delusional enough to imagine myself a Harvard grad. And that's what they're called, Harvard Grads. Never graduates."

Like identifies with like. I, too, have on occasion evoked the "that's horrible" response from friends before sending them into spasms of laughter. Perhaps for this reason, several years ago, before Augusten's memoir Running With Scissors was made into a major motion picture -several friends of mine began saying, "there's this writer who you absolutely HAVE to read."

Not only did I love him, but I found him absolutely essential. I began reading him at low period in my life and found not only did I love his work, but that he was a life saver. I read my way through Magical Thinking (a brilliant collection of essays), Dry (his disturbing memoir of overcoming alcoholism), Running with Scissors ( the almost unbelievable memoir of his comic tragic childhood) and Sellevision (a short novel) feeling like a had found a new friend.

His latest collection of essays, Possible Side Effects, did not disappoint. Call is kismet-- when I first picked up this collection in the bookstore it fell open in my hands to the essay entitled, "GWF Seeks Same."

Augusten, who by self-definition is prone to excess, convinces his shallow and vain lesbian friend--who finds that definition tolerable only if she adds "lipstick" to it-- to write a full page personal ad and place it in New York magazine. More than being a list of all that she likes, it is a listing of what she doesn't like…and begins with the lead-in "Lipstick Lesbian seeks same."

After she places the ad and Augusten reads it, he writes, "not only was the ad mortifyingly specific in what was and was not acceptable; not only was it horrifically shallow; not only was it the entire page-but it was my idea….She would blame me and make me pay the $3,000 that the ad had cost."

When his friend tells the then-single Augusten that he too should place an ad, he dismisses her and writes about his secret exploits writing mock personal ads where he assumes fake personas. "I didn't tell her that I did place ads. All the time. I went on AOL and wrote personal ads when I was drunk.…sometimes I was a gay guy who wanted to meet other gay guys interested in becoming straight…..Writing personal ads was my drunk fun. It was the solitary, intoxicated equivalent of throwing eggs through the open window of a passing car on the freeway."

In the conclusion of "GWF Seeks Same, "Augusten gives her more bad advice resulting in obsessive (some would say stalker like) behavior toward a woman she had begun to date. His friend ends up with someone from her "no" pile-a beautiful redhead (a criteria that she had ruled out) a nurse (which she was equally as dismissive of) and, of course, the one that Augusten had liked best from the very beginning.

Reading his unflattering portrayal of a lesbian who did not like that word did cause me to roll my eyes. But while Augusten's writing has its profound and even compassionate moments, the fact remains that he rarely speaks well of anyone with the possible exception of his dogs and his long-time partner Dennis.

Dennis is portrayed as Augusten's stable force, the one who manages his life and puts up with his quirks-and, reading between the lines, we find that Dennis is an admirable character because above all else he tolerates Augusten-a basis that all true love ultimately depends on.

If you have not yet read Augusten, chances are that you'll come to love him also. But just remember, he's horrible.